Indonesia is the home of satay (known as sate in Indonesian and pronounced similar to the English “satay”), and satay is a widely renowned dish in almost all regions of Indonesia; it is considered the national dish and one of Indonesia’s best dishes. Satays, in particular, are a staple in Indonesian cuisine, served everywhere from street carts to fine dining establishments, as well as in homes and at public gatherings. As a result, many variations have been developed throughout the Indonesian Archipelago.

In Indonesia there are some restaurants that specialized on serving various kinds of satay and present it as their specialty, such as Sate Ponorogo Restaurant, Sate Blora Restaurant, and also chains of Sate Khas Senayan restaurants, previously known as Satay House Senayan. In Bandung, the West Java Governor’s office is popularly called Gedung Sate (Indonesian: Satay building) to refer the satay-like pinnacle on its roof. Indonesia has the richest variations of satay in the world. The satay variants in Indonesia usually named after the region its originated, the meats, parts or ingredients its uses, also might named after the process or method of cooking. 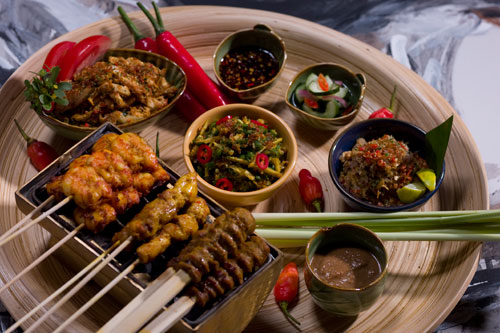 Satay may be served with a spicy peanut sauce dip, or peanut gravy, served with slices of lontong or ketupat (rice cakes), and relished with acar (pickles) consist of slivers of onions, carrots and cucumbers in vinegar, salt and sugar solution. Mutton satay is usually served with kecap manis (sweet soy sauce) instead of peanut sauce. Pork satay can be served in a pineapple-based satay sauce or cucumber relish. An Indonesian version uses a soy sauce-based dip.

So do you wanna taste it? It’s really deliciuos 🙂